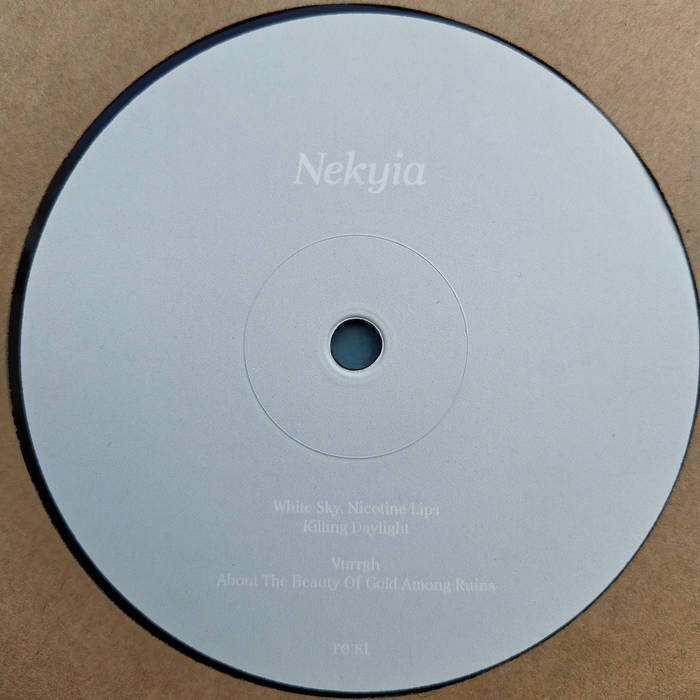 Nekyia (previously of Neurosplit) last appeared in November 2018 on a standout VA for Ruffhouse & Gremlinz's UVB-76. Now they're back with a solo outing on RE:ST that offers some thrillingly dark and deep bass music. "White Sky, Nicotine Lips" is a superbly heavyweight rhythm built on lurching loops that pin you to the floor, "Killing Daylight" is even more empty and unsettling, like prowling a desolate urban landscape. Flipside "Vurrgh" gets busy with minimal drum programming and layers of static and industrial hum and hiss that bring a real sense of paranoia. "About The Beauty Of Gold Among Ruins" closes out with bleak and smoky warehouse techno that hypnotises you in no time. Vital stuff.
- Juno Records

A simple kick drum and bleak bass line mould to form a cast iron backdrop for reverbed sounds and grey textures.
Devoid of melody the malignant groove builds tension before an understated breakbeat is introduced in the second half. Powerfully effective due to the tracks tight, hypnotic arrangement this is modern drum and bass at its purest, and rawest.
At a time when the amen folder is still a producer's best friend, it's great to see the more experimental, techno-influenced approach gain momentum. This stripped-back style is gripping and visceral, helping to fuel a burgeoning scene of young producers take modern jungle into a new decade avoiding worn-out templates from the past.
– Two Hungry Ghosts